Women and Girls in Science, Technology, Engineering, and Mathematics

In our modern society, we have a problem and that problem is that not enough women are going further into science and engineering careers.

Evidence shows a gender imbalance within science, technology, engineering, and mathematics careers (STEM).  Most of these imbalances may seem subtle or far away from our advanced society but in reality, numbers speak themselves:: a study published in Nature communications in 2018 shows that women are highly underrepresented at conferences compared to male counterparts. A recent study published at “The Lancet“ analyzes nearly 24,000 grant applications at the Canadian Institutes of Health Research (CIHR) and finds that women are less successful than men in receiving funding. Finally,  women encounter higher rates of attrition at every stage of the scientific career compared to those of men. Once more, the data face us with some unpleasant realities, precisely the fact that women are significantly underrepresented in science.

The question to investigate is… why so few? 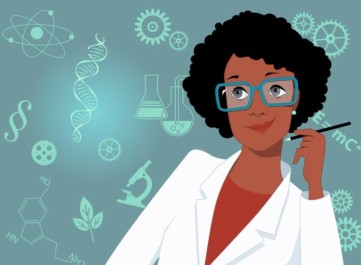 Research on this subject is becoming prolific, with three trend topics emerging in literature:

Average differences in math performance between girls and boys no longer exist in the
general school population (Hyde et al., 2008). However, the issue of cognitive sex differences in mathematical skills development remains hotly contested. Among all cognitive skills, spatial rotation skills is one of the largest gender gaps observed by researchers, with boys consistently outscoring girls(Linn & Petersen, 1985; Voyer et al., 1995). It should be highlighted that having well-developed spatial skill may help but it is not definitive to succeed in science and engineering (Ceci et al., 2009).  In any case, it is clear that spatial skills can be improved easily with training (Baenninger & Newcombe, 1989; Vasta et al., 1996) and should not prevent girls from pursuing math or science careers.

Thus, it seems that multiple factors contribute to the underrepresentation of women and girls in STEM and, therefore, research and society are called to find multiple solutions to correct the imbalance.